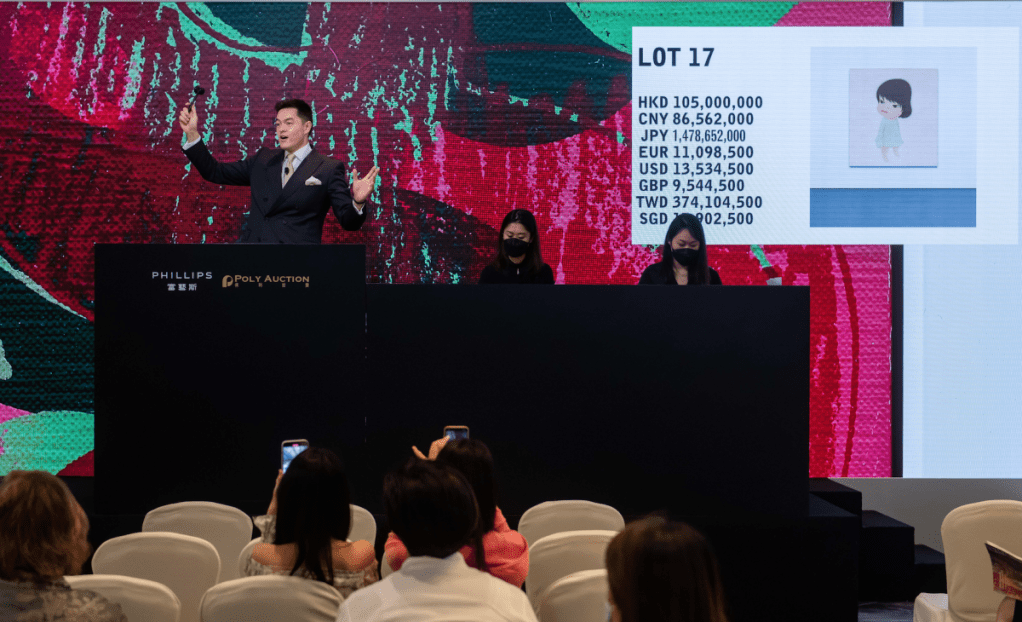 On Tuesday night, Phillips held a modern and contemporary art sale in Hong Kong that brought in a hammer total of HKD 405 million ($52.2 million), or HKD 492 with premium ($63.8 million). Staged in collaboration with the Chinese auction house Poly, it well exceeded its pre-sale low estimate of HKD 284 million ($36.6 million), which is calculated without the buyer’s premium.

The white-glove sale saw all 35 works sell, with just two lots withdrawn before the start of the sale. The strong result is 30 percent higher than the one generated by the first Phillips-Poly sale in December and double the $25.7 million made across 22 lots in last year’s equivalent Hong Kong sale in July.

Seven of the lots in this sale were guaranteed. Together, these lots had a collected low estimate of HKD 115 million ($14.8 million). Altogether, these works hammered above expectations at HKD 132 million ($18.15 million), accounting for 35 percent of the sale’s total.

The results from these Phillips-Poly series of sales demonstrate the rapid ascendance of the Asian market as a dominant buying region. In an interview after the sale, Phillips Asia chairman Jonathan Crockett told ARTnews that that the collaboration with Poly was in part an attempt to reach more buyers in mainland China, which had become increasingly difficult for Phillips during the pandemic. “The strategy paid off,” he said. “We were able to access an entirely new pool of buyers.”

According to Crockett, the 100-percent sell-through rate of both Phillips day and evening sales this round was a product of the house’s strategic lot selection: brand names with staying power alongside young artists with rising markets who have a proven track record with the region’s active buyers.

The sale’s top lot was Gerhard Richter’s vibrant abstract canvas Abstraktes Bild (940-7) from 2015, which the seller bought at Marian Goodman Gallery in 2016. It was secured by a guarantee with a low estimate of HKD 75 million ($9.7 million). Bidding opened at HKD 48 million, attracting just two bidders from Hong Kong and New York. The hammer fell within its estimate at HKD $80 million ($10.3 million, with a final price of $12.6 million), selling to a bidder on the phone with Charlotte Raybaud, Phillips’s head of Hong Kong contemporary art evening sales.

Next up was Nara’s 2000 painting Missing in Action, featuring his signature child-like protagonist. Three bidders—represented by Raybaud, Phillips head of jewelry Graeme Thompson, and a Poly specialist based in Bejing, Blair Cheung—vied for the work. It hammered for HKD 105 million ($13.5 million), going to Cheung’s client for a final price of HKD 123 million ($16 million with premium) and marking the second-highest price at auction for Nara, who is currently the subject of a Los Angeles County Museum of Art retrospective. The result is five times the $2.8 million price for which the Asia-based seller purchased it during a Phillips evening sale in London in 2015. It came to that auction from the estate of Miami-based collector Frederic Brandt.

Also among the top sellers was Cecily Brown’s painting The End (2006), which hammered at an above-estimate HKD 6.9 million ($889,000). The seller purchased it not long ago in 2017 at Phillips for $523,200, meaning that its value appreciated by 70 percent in just four years. While the painting may have exceeded expectations, it still does not approach the artist’s top prices.

Emerging artists drew the most attention among bidders. Toor’s Girl with Driver (2013) hammered for HKD 5.5 million (a final price of $890,000)—five times its estimate of HKD 1.2 million ($155,000). It surpassed his auction record of $867,000 set last month at Sotheby’s. Like Toor, Matthew Wong continues to be a market force in Asia. Five bidders competed of a 2017 landscape featuring a barely visible figure at center. It had been given a conservative estimate of HKD 6 million ($773,000), which drove competition for the piece high. The Wong painting ultimately sold for HKD 36.6 million ($4.7 million)—a sum just shy of the artist’s $4.8 million auction record—to a bidder on the phone with a Poly’s Beijing specialist.

Kudzanai-Violet Hwami’s The Egg (2016), depicting a lone beachgoer, attracted six bidders, including ones from Japan and Scarsdale, New York. Eventually, the painting sold for a double-estimate HKD 1.76 million ($227,000) to a buyer in Beijing. It was Hwami’s eighth painting ever to come to auction.

Martin Wong, who is known for his fantastical visions of New York City in the 1980s, was also represented in the sale. His painting Son of Sam Sleeps (1983), based on the media coverage of a series of killings across New York, came to Phillips after having appeared in Wong’s 2015 Bronx Museum of Arts survey. It sold for HKD 2.7 million ($357,000 with premium).

Zhang Xiaogang’s Family Portrait No. 13 (1998) attracted two bidders, one from Hong Kong, the other from Taiwan participating online. It hammered just above its low estimate at HKD 8.5 million ($1.1 million), likely going to the guarantor for a final price of HKD $10.5 ($1.4 million).