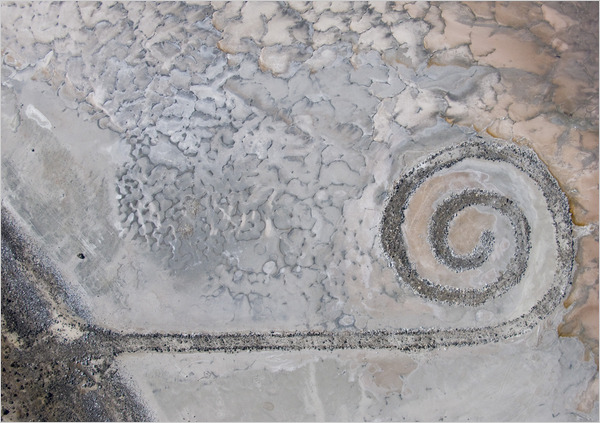 “In my field we’re trained to make condition reports,” said Francesca Esmay, Dia’s conservator, but she added of Smithson’s work, composed of more than 6,000 tons of rock and soil: “Its scale is such that I can’t just go out with a camera and pencil and clipboard by myself and describe it.” So several months ago she turned to the Getty Conservation Institute, an arm of the J. Paul Getty Trust, which has organized and assisted in conservation and monitoring of art and historic sites from Central America to Africa to the Middle East.

After considering nearly every possible way to document “Spiral Jetty” from above — Rent a weather satellite? An airplane? A helicopter? Use a kite? — the institute, which often works in countries where conservation projects are carried out on shoestring budgets, came up with a remarkably simple solution: a $50 disposable latex weather balloon, easily bought online.

Along with a little helium, some fishing line, a slightly hacked Canon PowerShot G9 point-and-shoot digital camera, an improvised plywood and metal cradle for the camera and some plastic zip ties (to keep the cradle attached and the neck of the balloon cinched), a floating land-art documentation machine was improvised, MacGyver-like.

How to Conserve Art that Lives in a Lake? (NY Times)