The Modigliani market has been as faddish as any painter’s in the recent rollicking years of art-mania. Even then, big money gravitated toward some works and others struggled. So Modigliani might be as good an indication of the after-the-fall market. The Economist looks at the two works leading the London Impressionist and Modern sales. One is a Caryatid (left) estimated at between £6-8 million. (A pair sold four years ago at Sotheby’s for £2.7m and another 2 and a half years ago at Christie’s for £3.5m) Another is a portrait of two girls estimated at between £3.5-5.5m. 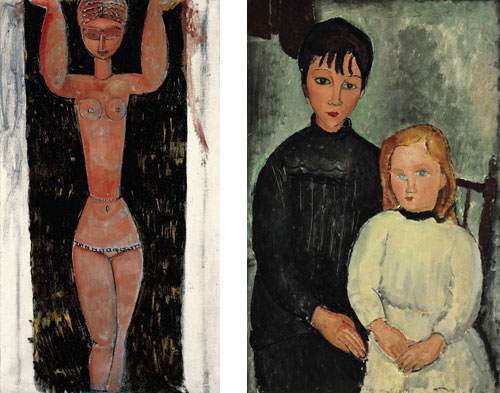 (Excerpts from the Economist’s description of the works after the jump.)

By 1913, Modigliani had been in Paris for seven years. He dreamt of creating a great series of stone caryatids, inspired by the nude or partly draped female figures that supported the stone entablatures of ancient Greek temples. Ultimately, he managed only two full-length figures, turning his attention instead to two-dimensional forms, executing a large number of studies and drawings and just five in oil.

Freed of the need to bear a load, which would have subtly affected the shape of the shoulders and thighs, Modigliani’s painted caryatids instead become highly stylised attenuated female forms. Narrow-waisted and long-limbed, they seem to hark back more to the Kouros figures of classical Greece: abstract, rhythmic and ready for some pagan dance. It comes as no surprise to learn that not long before painting “Cariatide” (pictured, left) in 1913 Modigliani met Constantin Brancusi, also a foreigner in Paris, with whom he shared an interest in reducing the human body to the most minimalist sculptural form.

But what a difference five years makes. In 1918, Modigliani left Paris for the south of France. The first world war, and the attendant shortages of food and heating coal, had taken their toll on his health, and when the bombardment of Paris began in the final months of the war, his dealer Léopold Zborowski left for the Côte d’Azur. [ . . . ]

The two figures in “Les Deux Filles” inhabit their own private, wordless worlds. So different—in age, colouring and comportment—they nevertheless share some connection. Are they sisters? Are they two girls? Or an adult and a child? Did they represent the females who were so important to Modigliani?