The Economist goes into detail on this re-discovered Barbiere work from Sotheby’s upcoming Old Master painting sale in New York. Estimate at between $750,000 and $950,000, the painting is not going to get the level of attention devoted to the sale’s marquee works: the two Hals paintings, the Turner or even the Titian that also depicts a scene with Salome and St. John, though in a decidedly different state. 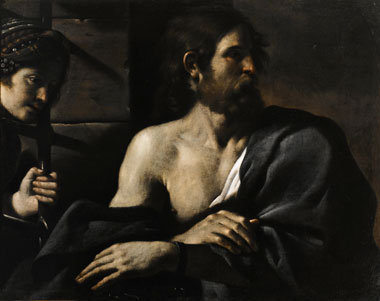 Giovanni Francesco Barbieri was born in Cento, near Bologna, in 1591. Precociously talented, he taught himself to paint. A pronounced squint inspired the nickname by which he is better known, Guercino (the word means “squinter” in Italian). Before he grew old, conventional and rich, Guercino was one of the most interesting painters of the Italian Baroque. His work is characterised by psychologically profound facial expressions and gestures; rich, strong colours and atmospheric handling of paint. His figures of men were often controversial. “Saint Sebastian Tended by Two Angels” (now at Sudeley Castle, Gloucestershire) shows pain and rapture combined; “Christ Crowned with Thorns” (Szépmüvészeti Museum in Budapest) offers an androgynous representation of the ecstasy of martyrdom, and “Samson Captured by the Philistines” (Metropolitan Museum of Art) has tremendous sexual energy.

(More detail on the importance of Barbieri’s St. John after the jump.)

In his 20s Guercino was taken up by two important patrons, Cardinal Scipione Borghese and his great art-collecting rival, Cardinal Alessandro Ludovisi, Archbishop of Bologna, who called Guercino to Rome shortly after he was elected pope in February 1621, assuming the name Gregory XV.

Just before he left for Rome, Guercino painted “St John the Baptist in Prison Visited by Salome”, a work to which he would often return. The prime version of Guercino’s St John is in a private collection in New York. Sir Denis Mahon, a 98-year-old British art historian and collector, has another, which he has given on long-term loan to the National Gallery of Ireland in Dublin. A third version appeared at auction in Venice in 2004, and a fourth is now discreetly being offered for sale by a London dealer, Simon Dickinson.